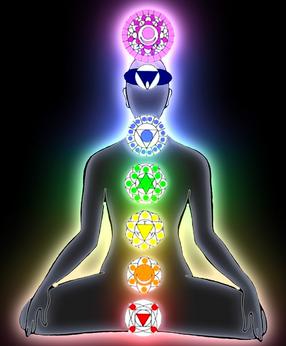 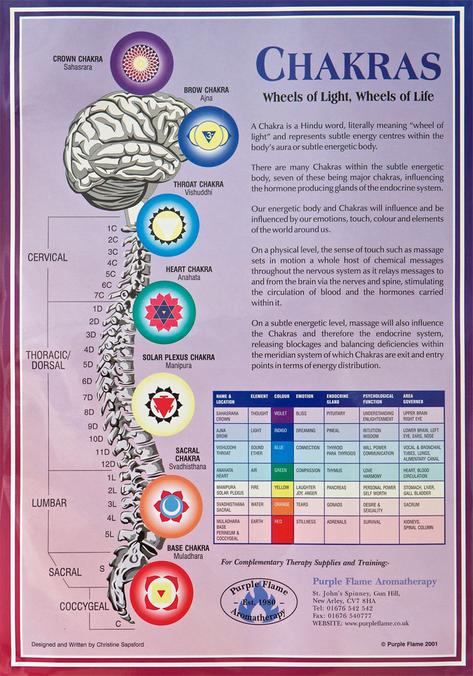 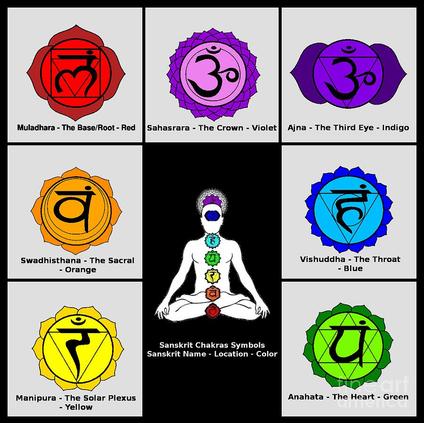 These swirling wheels of energy correspond to massive nerve centers in the body.  Each of  the seven main chakras contain bundles of nerves and  major organs as well as our psychological, emotional, and spiritual states of being. Since everything is moving, it’s essential that our seven main chakras stay open, aligned, and fluid. If there is a blockage, energy cannot flow. Think of something as simple as your bathtub drain. If you allow too much hair to go into the drain, the bathtub will back up with water, stagnate and eventually bacteria and mold will grow. So is too with our bodies and the chakras.  A bathtub is simple; it's physical, it's obvious, so the fix is easy.

Keeping a chakra open is a bit more of a challenge, but not so difficult when you have awareness. Since mind, body, soul, and spirit are intimately connected, awareness of an imbalance in one area will help bring the others back into balance. Take for example, a wife, who has recently lost her husband. She develops acute bronchitis, which remains in the chest, and then gets chest pains each time she coughs. The whole heart chakra is affected in this case. If she realizes the connection between the loss and the bronchitis, healing will occur much faster if she honors the grieving process and treats that as well as the physical ailment

The Chakras of Spirit
Fifth Chakra: is located in the area of the throat. This is our source of verbal expression and the ability to speak our highest truth. The fifth chakra includes the neck, thyroid, and parathyroid glands, jaw, mouth, and tongue.

Sixth Chakra: is located in between the eyebrows. It is also referred to as the “third eye” chakra and is our center of intuition. We all have a sense of intuition but we may not listen to it or heed its warnings. Focus on opening the sixth chakra will help you hone this ability.

Our bodies are in constant flux between balance and imbalance. Unless you have an apparent problem in one area of the body, imbalances can be difficult to detect.  That being said, it’s good to bring awareness to your body/mind and start to learn its signals and clues.  For example, frequent constipation can indicate a blockage in the first chakra. A recurring sore throat leaves clues to a blocked fifth chakra. Frequent headaches around the area of the forehead may mean your sixth chakra is blocked.”

Chakras
Aura and chakra imaging simply utilize biofeedback technology to provide visual images and feedback of the state of our aura and chakra health and just how significantly our stress levels, thoughts, emotions, feelings and physical discomforts/illnesses can impact the state of our auras and chakras.  This may assist us in identifying areas needing attention and visually illustrates the positive impact simply relaxing and improving our thoughts, feelings and emotions has on us.
by Michelle Fondin  (http://www.chopra.com/ccl/what-is-a-chakra)
"The Sanskrit word Chakra literally translates to wheel or disk. In yoga, this term refers to wheels of energy throughout the body. There are seven main chakras which align the spine, starting from the base of the spine through to the crown of the head. To visualize a chakra in the body, imagine a swirling wheel of energy where matter and consciousness meet. This invisible energy, called Prana, is vital life force, which keeps us vibrant, healthy, and alive.

The Chakras of Matter
The first three chakras, starting at the base of the spine are chakras of matter. They are more physical in nature.

First Chakra: is the chakra of stability, security, and our basic needs. It encompasses the first three vertebrae, the bladder, and the colon. When this chakra is open, we feel safe and fearless.

Second Chakra: is our creativity and sexual center. It is located above the pubic bone, below the navel, and is responsible for our creative expression.

Third Chakra: is the area from the navel to the breastbone. The third chakra is our source of personal power.

The Fourth Chakra: The Connection Between Matter and Spirit
Located at the heart center, the fourth chakra, is at the middle of the seven and unites the lower chakras of matter and the upper chakras of spirit. The fourth is also spiritual but serves as a bridge between our body, mind, emotions, and spirit. The heart chakra is our source of love and connection.